Market Pulse - the week in review

As we discussed since the launch of this weekly letter, we expected inflation to start to show signs of deceleration over the next few months and expected this to support financial markets.

THIS WEEK’S RECAP: ▪ November 11 was Remembrance Day, a time to remember those who gave their life through military service and to honor all those that served in wartime and global conflicts. Lest we forget.

▪ As we discussed since the launch of this weekly letter, we expected inflation to start to show signs of deceleration over the next few months and expected this to support financial markets. Thursday’s US CPI release confirmed this, coming significantly below expectations. This sparked an impressive rally in equities, with growth-titled names leading the way and the Nasdaq index closing up 7.5%. Bond yields also fell significantly, with 10-year US treasury yields dropping 30 basis points to 3.80%. We expect the downward pressure on inflation to continue, but one must remember that it is still significantly higher than Central Bankers would like it to be.

▪ While votes are still being counted, it is now clear that the expected red wave during this week’s US mid-term elections did not materialize. The Republican Party did make gains in the House of Representatives but probably failed to win control of the Senate. Three Senate races remain in contention (votes continue to be counted in Nevada and Arizona, while Georgia has gone to a run-off election scheduled for early December). The fractured nature of the US congress and executive branch will limit how much can be accomplished by the US government and may present challenges in advancing items such as the budget and debt ceiling. On the flip side, political gridlocks are historically positive for financial markets.

▪ With this week’s inflation news, the earnings season and mid-term elections behind us, the setup seems quite favorable for financial markets going into year-end and its seasonality tailwinds. While we think markets can recover a portion of their year-to-date losses between now and December 31st, the inflation dynamics will remain complex, and the economy will likely slow considerably from here. This week’s developments are very positive, but we are far from any “all-clear” signal yet. 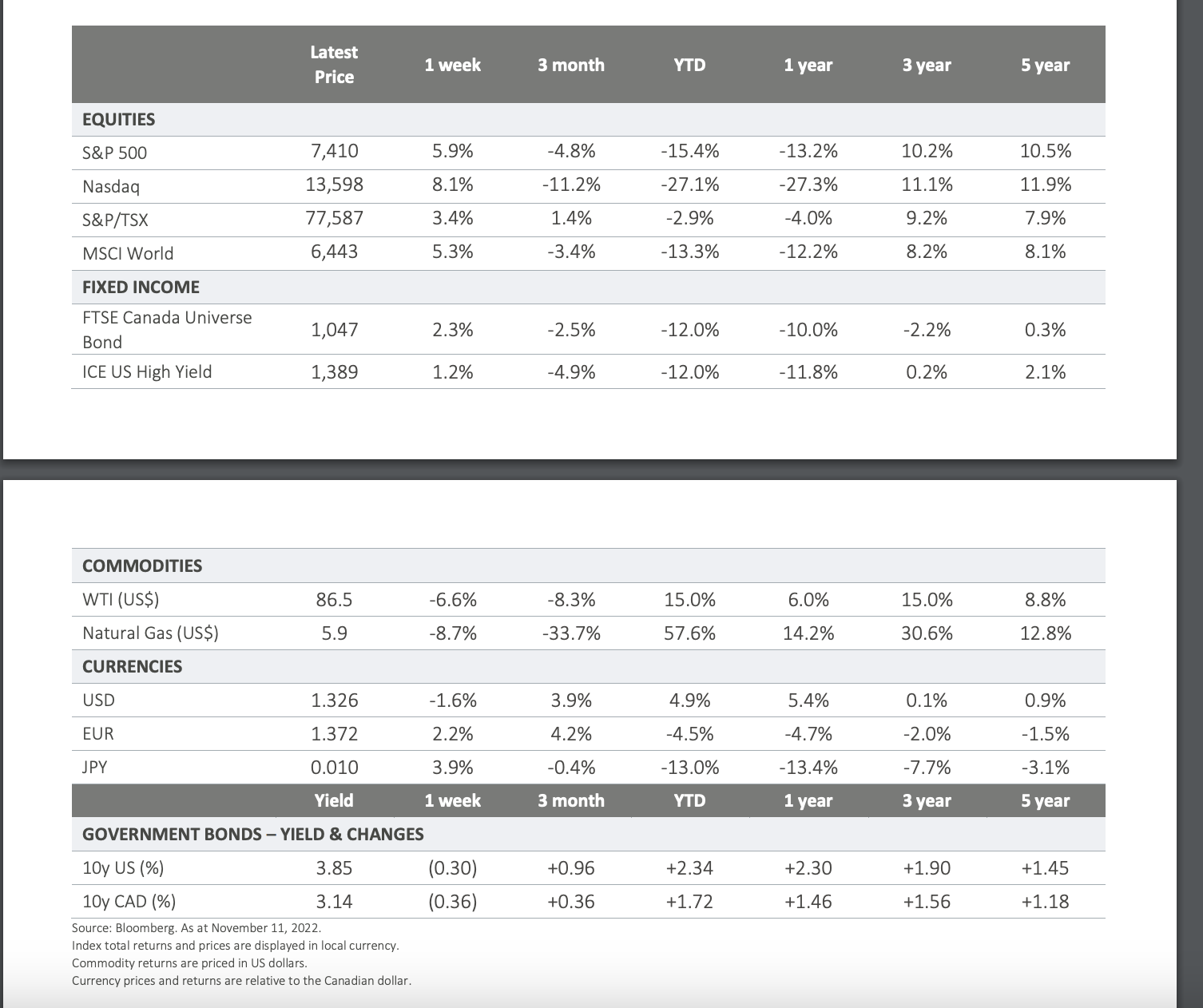 ON DECK FOR NEXT WEEK: ▪ We will get Canada’s October inflation numbers on November 16th . Expectations are for a slight decrease in both headline and core readings. Given Canadian markets reaction to this week’s US release, we expect that the reaction of markets will be muted unless the inflation print is significantly higher than expectations. We will also get inflation numbers for Europe, UK and Japan.

▪ Leaders of the G20 will be meeting in Bali, Indonesia. It will be the first time since COVID began that leaders such as Biden and China’s Xi will be meeting in person. These meetings come at a time of heightened geopolitical conflict and present an opportunity for leaders to deescalate some of the tensions that has built in recent years. Russia’s Vladimir Putin announced this week that he will not attend despite previously suggesting otherwise.