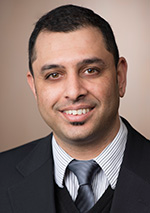 Hitesh joined us in 2011, as the assistant to Laurie Winters, Lorea DeClercq and Michael Winters, also known as "The Team". Hitesh, who is originally from Zimbabwe, received his undergraduate commerce degree at Rhodes University in South Africa. After working briefly in Zimbabwe and England, he moved to Canada in 2008 to be with his wife, Pranita.  One of his first jobs was as a client service representative with a mutual fund company. This role attracted him to the financial planning industry which then led him to take the position as an assistant with “The Team”.

Hitesh resides in New Westminster with his wife Pranita, daughter Tia and son Aarav.  In his spare time he enjoys cooking, playing soccer, biking, photography and spending time with his family.