Recent Consumer Price Index data suggests a more optimistic 2023, but only after weathering a tough winter.

The October U.S. CPI, as reported at an annualized rate below 4%, leads to some hope that the Fed’s hiking has been effective, and rates are close to terminal. Investors have re-priced terminal Fed Funds rates throughout the year, from as low as 2% to most recently 5%. The current CPI details reveal that prices of services are finally cooling while goods are under increasing pressure. Online retailer Amazon recently commented that they expect this December to be one of the toughest Christmas holiday seasons for sales as demand continuously declines in America.

For rate hikes to effectively cool inflation it has to be accompanied with a hawkish tone. The central banks obviously understand it very well. Even though inflation may have seen some early signs of cooling, central banks will talk tough for the near future until demand and supply return to balance and inflation normalizes  to trend. We anticipate it to be some time in the second quarter or third quarter of 2023.

Albeit the near-term volatilities, long-term prospect for equity is solid as we anticipate larger-than-normal returns driven by solid earnings growth and improving earnings multiples over time. Even though we may head into an economic slowdown or recession, earnings will be resilient given productivity enhancement driven by new technologies. In the bond land, yields have improved significantly; as a result, creating cushion for any further losses due to rising rates. Investors will have to accept higher volatility, but they are also compensated by higher yields, higher capital gain potential and higher returns.

Coming into 2022, the asset mix of Assante Private Portfolios was defensively positioned compared to a year ago. We maintained underweight to government bonds and cut equity throughout the year. Following the current asset mix (Table 1) of a model 40i60e portfolio and the equity allocations (Table 2) of the same portfolio. We had very low government bond exposure (15.3% underweight) and duration relative to the portfolio benchmarks. While equity is meant to hold for long term, we took our weight lower as we saw some near-term challenges. Within equity, we overweighted Canada, real estate, IT, and energy sectors asthey reflect both our short-term outlook and longer-term convictions. 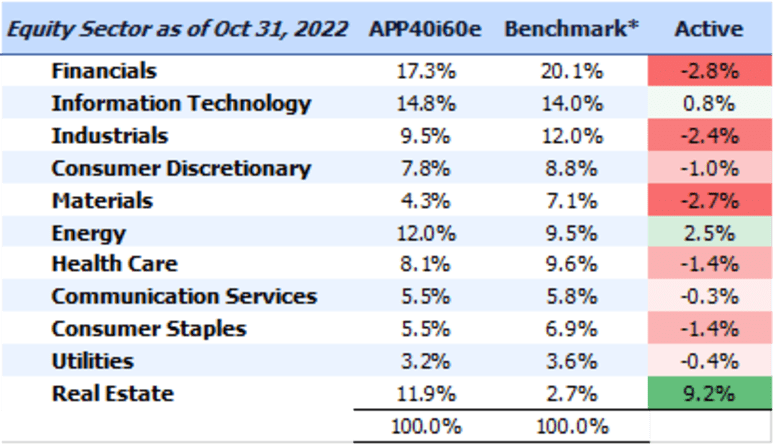 In the near term, we find Canada, energy, and low volatility factor more favorable given our outlook. The Canadian market is a late cycle performer, which has more commodities and energy exposure. Commodities have historically outperformed in inflationary environments and the geopolitical tension between Ukraine and Russia also contributed to the surge in commodity prices. Canada also has score well on valuations.

We keep our high convictions: (IT, energy and real estate sectors) for long run. Technology is in our everyday life and will only grow. We like semiconductors as they are the “new oil” in the technology world. As the world transitions to clean energy, demand for fossil fuel will not peak until at least 2030. The challenge is lack of capital spending is causing supply to plateau much earlier driving prices higher. Energy companies are generating very strong cash flows and returning cash to shareholders though dividends and share buybacks. Real estate in the near term is out of favour due to higher interest rates. Prices are depressed based on higher rates but will have the reverse effect when rates fall. In addition, replacement cost has consistently risen with inflation and labour cost. Within real estate, we favour data centres, apartments, self storage, and underweight offices and malls.

No doubt some of the long-term commitments to IT and real estate have not performed in 2022 and led to some underperformance. We are confident they will significantly out-perform and continue to hold. Overall the portfolios are well positioned with balance between growth and value and additional cash for new opportunities.

The markets are beginning to show signs that the central banks’ rate hikes have been effective, however the return to trend for many economic indicators will be slow. While a further economic slowdown may be ahead, bond yields are helping to offset losses in the near-term and long-term prospects for equities are favourable.