Market Pulse - The week in review

Protests over the covid-zero policy in China weighed on global risk appetite early in the week.

▪ Protests over the covid-zero policy in China weighed on global risk appetite early in the week. However, growing optimism of easing restrictions (less forceful lockdowns and a shifting narrative) provided Chinese equities with some lift through the balance of the week, spilling positively into other regions.

▪ In prepared remarks and audience Q&A on Wednesday afternoon, US Federal Reserve Chair Jerome Powell confirmed a likely slowdown in the pace of rate hikes that could happen as early as this month. US bond yields responded positively, as have equities and overall risk assets. However, his tone was cautious given the 3.75% in rates hikes so far this year are still feeding through to the real economy, and risks to inflation and the overall health of the economy remain elevated.

▪ Canadian GDP reading for Q3 came in stronger than anticipated. Higher exports, non-residential building and inventory stockpiling offset the declines in housing investment and spending. The pass-through effects of higher interest rates are finally starting to show up in Canadian, and global data. We expect this to be an ongoing theme as economies increasingly show various forms of slowdown due to higher interest rates, and less accommodative policies.

▪ The employment reports in both the US and Canada showed the resiliency of labour markets. US numbers came above expectations, with wage inflation inching up, while Canadian numbers were in-line with forecasts with the unemployment rate lower than expected. Employment is known to be a lagging indicator, but the fact that they have not yet shown much impact from the ongoing rate normalization is going to continue to put pressure on Central Bankers. This explains why we end the week on a mixed note. 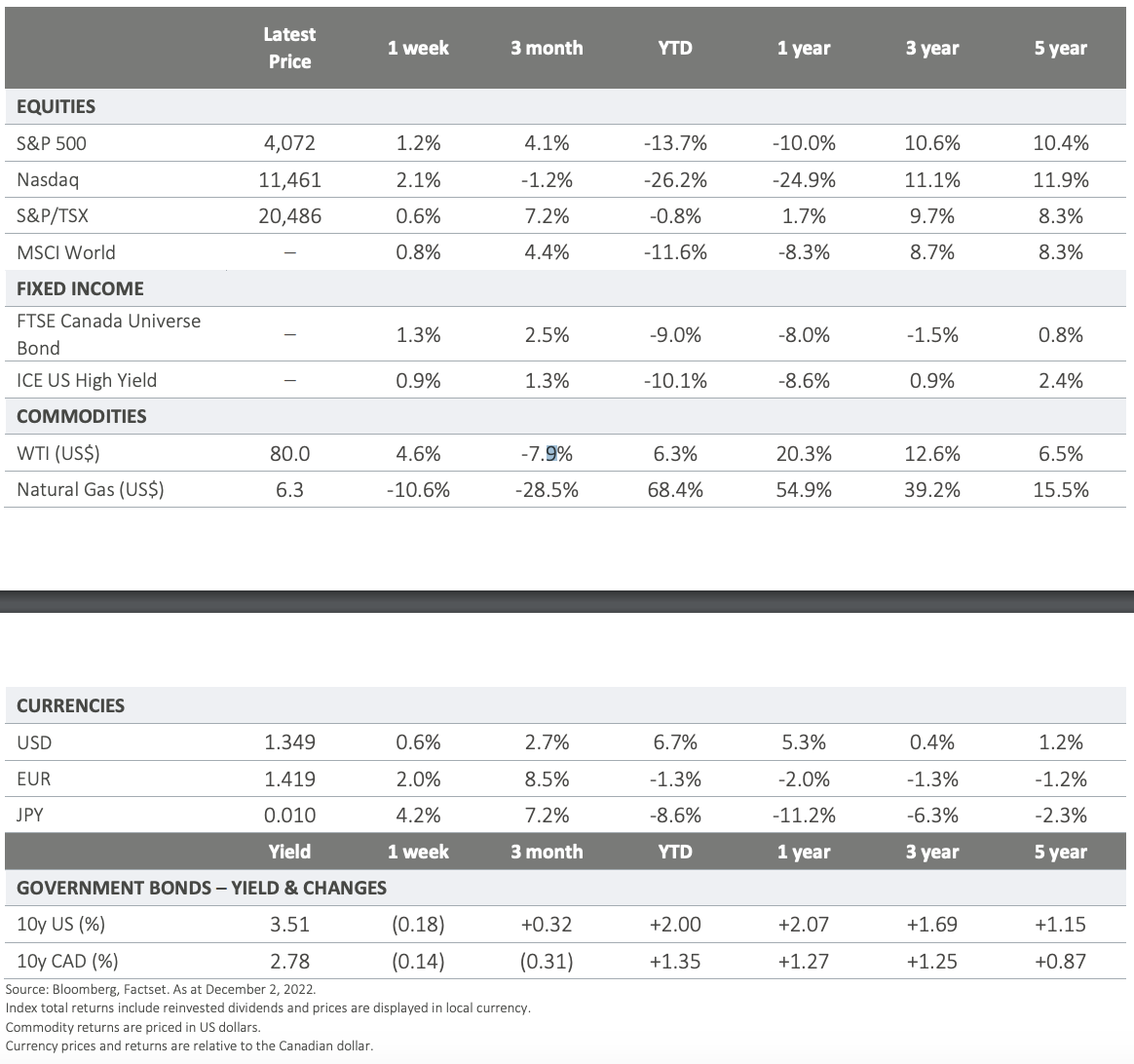 ON DECK FOR NEXT WEEK:

▪ The last round of central bank policy decisions for 2022 is on deck. First up on Tuesday is the Reserve Bank of Australia where the market is split on whether a 25 basis points (bps) hike will be delivered. The Bank of Canada is expected to raise their overnight rate by 25 bps to 4% on Wednesday. This will set the table for the Federal Reserve decision on US funding rates, which we will get the following week (December 14th).

▪ The month of December is typically favorable for risky assets. As we pointed out over the last week, we believe this seasonality is likely to prevail this year, with additional factors favoring some further recovery for risky assets (the main one being the massive drop in long-term yields we have seen since the first week of November). We believe the first few months of 2023 will be more difficult to navigate, as the focus is likely to shift to the extent of the economic slowdown. The line is thin between a goldilocks scenario where growth slows down enough to tame inflation but not too much to impair corporate earnings (which would end up being very positive for risky assets), and a more severe slowdown that would likely lead markets lower.